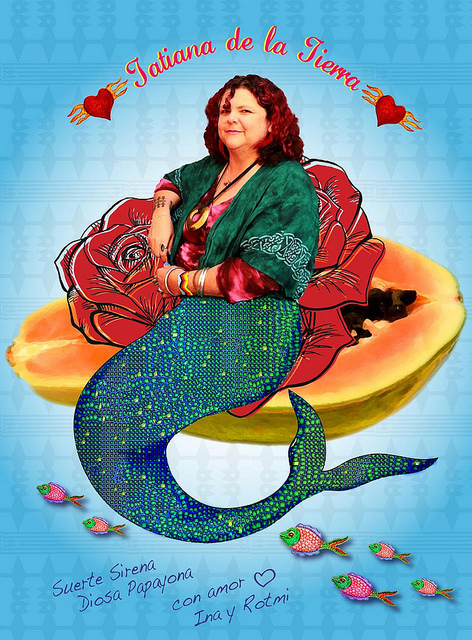 “In May of 2012, the doctors diagnosed her with terminal cancer, but tatiana de la tierra, who believed in the power of metaphors, created an alternative reality for herself. The cancer cells blooming wildly inside her were not evidence of imminent death; they were proof of a metamorphosis. tatiana would not ‘pass away’ into heaven or hell. Instead, she would shed flesh and blood and swim back to her divine beginnings, the Cosmic Ocean. During the final months of her life, tatiana of the earth renamed herself Suerte Sirena, blessing her journey with luck because who doesn’t need a little luck when leaving the human body and traveling into the depths of the Magical Unknown.  It was in July that tatiana’s human body really began to wither, but on a spiritual plane, she grew glittery scales. When her lungs began to wheeze, she sprouted gills. When her legs clung together, waddling and then flapping instead of walking, those of us around her knew that her metamorphosis from earth-grounded woman to free-flowing mermaid was nearly complete. She swam out of her body on July 31st, 2012.”